I have added a new maze to the directory.

Dragon Fly Maze  – (Bourton-on-the-water – GL54 2EE) This is a puzzle yew hedge maze where you have to find 14 clues to solve the puzzle. Only with the help of these will you be able to find the hidden golden dragonfly.

Bourton-on-the-water is a lovely Cotswold village to walk around with lots of quirky shops and places to eat and drink. Very busy all year around particularly around bank holidays and in the summer. It is best to get to the car park early to ensure you can find a space.

Modern life is busy. However, a plan such as this is always in the back of the mind waiting for that small opportunity to jump into the fore and say “Look at me”.

Recently, I had some time off to spend with my wife and child (16 months), we had the post modernistic staycation. I spent some time looking on the internet for somewhere to go locally which would offer lots of stimulation for the little one. I found a place which was an activity play ground with some animals. Nothing fantastic but it did claim to have a sensory walk which I thought would do the job and for the big ones it offered tea and cake.

At this point you are wondering how this links to mazes. Well it was perhaps an example of how not to do this kind of tourist endeavour.

The sensory walk was rubbish and in no way stimulated the senses. Only one of the displays which wasnt very innovative kept the little one vaguely interested.  A lot of the displays could have been picked up on ebay because they were cheap and just plonked on the field. There was clearly a reason they were for sale because frankly they were rubbish.

Whilst contemplating our experience over tea we disected our visit. Out of ten I would give the place a maximum of 4.

The significant flaws were:

To provide a balanced view, the positives were:

Anyway, for the maze project there are some key learning points for the project:

Other thoughts have also followed about how to design my own maze project, more of my thoughts to come unless modern life gets in the way again.

*Note: I am not going to name the place as they have only been open 3 years and are probably still learning and I wish them the best in their endeavour, although personally unless I meet a friend who raves about the place I will never go back.

Its been a while since I have devoted time to this site, as usual other things have got in the way. However, having seen a maze out on a walk today and thinking about my business future has led me to think it is high time I put up an update.

Project wise I am slowly working on a spreadsheet ready to upload as a new text maze, however it has 343 individual locations so it is taking me a little while. So far I am at location 110.

I was out walking near Kirtlington in Oxfordshire where I visited Kirtlington Quary to do some geocaching. There is a lovely flat area in the middle of the quarry and someone has taken the time and trouble to lay out a traditional unicursal maze. Find several images of the maze on google.

Other than that have been carrying my random search through the interweb for more maze items to blog about.

This maze combines two or my favourite things, trains and mazes. I like the idea of going to the centre and ringing the bell to declare success to anyone that cares to listen.

I work on many little computer programming projects simply because I want to see if it can be done.

One of my latest projects has been a text adventure programme where I can present my mazes as an on-line text adventure, the sort of adventures around in the 1980’s and 90’s where you could go North, East, South or West. The one I remember most is Sphinx Adventure on the Acorn electron. I remember playing along using a map and pencil to try to keep track of where I was going.

Well for the first time ever some of my maze designs can come to life as on-line text adventures, why don’t you try it for yourself, don’t forget the pencil and paper.

I will add more on the future and I may even make them more interactive.

Well here are two more variations on a theme. I was aiming for a small symmetrical maze design and once I had one it lead to the other. 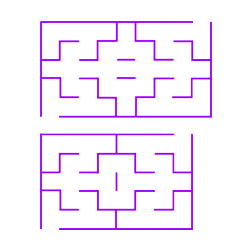 The bigger one of the two could have a statue in each of the four alcoves where the statues would stare at each other. Although two of the statues wouldn’t but then I thought the two central panels could be artistic glass panels and so they could again.

Then I thought what if you made a whole maze out of glass. You could either have the coloured glass bricks so you couldn’t see through the walls but the maze was flooded with light or plain glass so you could see everyone in the maze, could be handy for adults keeping an eye on the kids. Definitely some options there for a maze concept and a variation on the original mirror maze.

Posted in Our Maze Concepts, Simple Artistic | Leave a comment

Some random thoughts about marketing the maze project. Radio ads would work well.

“Lose your kids this half term”

“Find yourself or find someone else in the maze”

“Left… Right…Left… Right.. haven’t we been here before. The Maze Project, find us first and then get lost in the world of mazes.”

This will add another dimension to the maze project. Strictly geocaches should be on public sites where there are no barriers to entry but obviously with the maze project there will be an entry fee. However, this does not stop us having our own hidden caches which we can advertise on our own website, hand out fact sheets and have specially geocaching introduction days for people that visit. We could also be geocacher friendly and have a local information notice board for nearby geocaches.

People could borrow GPS units from the ticket booth. On a basic level they would be given  a list of the GPS co-ordinates for the centre of the outdoor mazes, and they could try to use the GPS to help them get to the centre of the maze.

On a more detailed level we could have a number of geocaches hidden in each maze. Each geocache could contain a stamp and log book. At the ticket office we could sell special personal log books to log each geocache found. Some mazes could have simple GPS co-ordinate locations to find. A more complicated version  would have cryptic clues, for example we may have a maze with greek / roman statues in so there may be a cryptic clue where the answer is aphrodite. So the cache could be located behind aphrodite’s statue. Although for that kind of puzzle you would not necesarily need GPS as you could give someone just the cryptic clues. If you wanted to use GPS you could arrange it so that the clue was in two parts and is picked up at two different GPS locations and then you work out the clue to find the third location. Alternatively clues at two sites could give you the GPS numbers for the third site etc.

These ideas are definitely enhancements which would help make the project more interesting and make people more likely to visit again.

From a retail point of view in the site shop you could sell geocaching products. As the shop / cafe will not be part of the pay site you may then pick up pass traffic from geocachers.

Posted in Our Maze Concepts, retail | Leave a comment

Mazes in the Press: Britain’s best mazes (The Times)

An article from 2006 talking about some of the best mazes in the UK.

Here are some more very simple small maze designs. As previously these are more artistic mazes rather than mazes to get lost in. 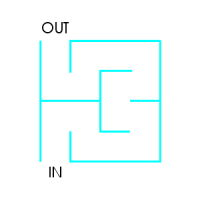 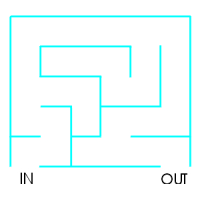 Posted in Our Designs, Simple Artistic | Leave a comment

Some thoughts about the site location which need to be jotted down.

The final tourist attraction is likely to be at least partially undercover to attract the wet weather tourists. I have had some thoughts about a big aircraft hanger but I am not sure you will find just one on their own and it would be a bit of an ugly building. Although it would be worth bearing in mind as an old aircraft hanger would be an excellent empty shell for an indoor maze, perhaps with a mezzanine deck to look down into the maze.

Again probably in short supply but if there did happen to be an old mill / warehouse it would be the perfect empty shell. This time unlike the aircraft hangar it would be a picture perfect location especially if it had a running stream by the side.

There is going to be a need for adequate parking, should also think about nearby public transport links. There will also be enough land for gardens and outdoor mazes. By in large the site should be flat or gently undulating. Hillside at one end of the site could be interesting as there is an idea for a snakes and ladders maze.

Access to the national road network should be considered, nearest motorway junctions, nearest A roads, how many routes to the site etc.